Actors are known for sometimes going to extremes to prepare for a role. People like Heath Ledger, Hilary Swank, Robert De Niro, and Christian Bale have been recognized for their method acting in previous roles, and sometimes this extreme dedication becomes physical, too.

Some actors have undergone extreme weight loss transformations to prepare for a role. And often, the lengths they go to are unhealthy and borderline dangerous.

Read on to learn more about some of the most extreme ways actors have lost weight for a role, while keeping in mind that no one should try these diets in any capacity.

Kunis played a ballerina in the 2010 creepy film “Black Swan,” and to fit the ballerina persona, Kunis decided to lose weight for the role. However, Kunis shared on Sirius XM that she lost an unhealthy amount of weight and would not recommend anyone to do what she did for the film.

“And I’ll tell you this, I’m not promoting this at all, but I used to be a smoker, and so I smoked a lot of cigarettes and ate a limited amount of calories,” Kunis shared. “Twelve hundred calories and I smoked…. I’m not in favor of this at all. It was horrible.”

Hathaway lost a total of 25 pounds for her role as Fantine in “Les Miserables.” While she was celebrated and recognized for her amazing performance in the film, the star underwent a dangerously unhealthy diet for this weight loss.
According to Vogue, Hathaway ate only two pieces of oatmeal pasta a day to drop the weight. “I had to be obsessive about it – the idea was to look almost dead,” she tells Vogue.

3 Christian Bale ate an apple a day for ‘The Machinist.’

Bale is perhaps one of the most extreme actors when it comes to transforming his body for a role. He has both lost weight and gained weight for films, but the body transformation that has most resonated with audiences is his 55-pound weight loss for “The Machinist:” a film about a man struggling with insomnia.

To lose weight, Bale drank black coffee and ate a can of tuna with an apple every day. While this extreme weight loss worked, it’s no surprise that something like this can wreak havoc on one’s health. In fact, Bale now admits that his past methods of transforming for a role must stop. He told The Sunday Times in 2019 that “I can’t keep doing it. I really can’t. My mortality is staring me in the face.”

4 Zoe Kravitz ate clay for ‘The Road Within.’

In 2015, Zoe Kravitz played the role of someone who is bulimic and anorexic for a movie called “The Road Within.” The star had to lose weight for the role, which she did with an extreme cleanse.

“I did a cleanse,” she said in an interview with Us Weekly. “I tried to do it as healthy as possible, even though it’s not a healthy thing to do. I ended up drinking clay because it cleanses your body and fills you up. I ate a jar of pureed vegetables a day and ran.”

McConaughey lost 50 pounds for the 2013 film “Dallas Buyers Club,” in which he played a man with HIV/AIDS in the 1980s. To go from 188 pounds to 135 pounds in just five months, McConaughey adopted a strange diet of fish, vegetables, protein and tapioca pudding.

“I found tapioca pudding and I found the smallest antique spoon in New Orleans, a tiny sugar spoon, and I ate it with that so it would last longer,” McConaughey said. 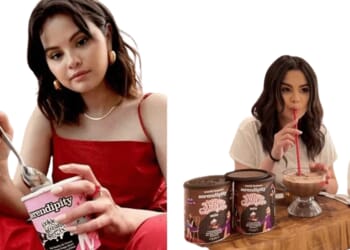